Would you like to switch to the accessible version of this site?

Don't need the accessible version of this site?

From Wikipedia, the free encyclopedia 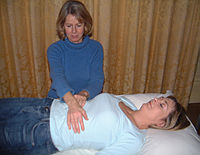 A Reiki treatment in progress

Reiki (  or ì¤­, Reiki? IPA: /ÈrejkiÐ/) is a spiritual practice[1] developed in 1922 by Mikao Usui. After three weeks of fasting and meditating on Mount Kurama, in Japan, Usui claimed to receive the ability of 'healing without energy depletion'.[2] A portion of the practice, tenohira or palm healing, is used as a form of complementary and alternative medicine (CAM).[3] Tenohira is a technique similar to the laying on of hands. During the practice of tenohira, practitioners believe they are moving "healing energy" (a form of ki) through the palms.[4][5]

Neither the existence of ki nor any mechanism for its manipulation are scientifically accepted, and the evidence base does not support the efficacy of reiki or its recommendation for use in the treatment of any condition.[6][7]

Look up reiki in Wiktionary, the free dictionary.

English reiki or Reiki transliterates a Japanese loanword. Reiki is syntactically used as a noun (referring to either "the putative energy" or "the therapeutic method that uses it"), a verb, or an adjective. Some authors like Hawayo Takata (below) translate reiki as "universal life energy".[12] This coinage avoids the negative "mysterious, spooky" connotation of reiki but partially mistranslates: ki means "life energy"  rei does not mean "universal".

Mikao Usui (ü7) originated Reiki in 1922 after a twenty-one day retreat on Mount Kurama, involving meditation, fasting, and prayer.[2] Usui said that by mystical revelation he had gained the knowledge and spiritual power to apply and attune others to what is called Reiki.

Usui was an admirer of the literary works of Emperor Meiji, and, in the process of developing his Reiki system, summarised some of the emperor's works into a set of ethical principles, which later became known as the Reiki Principles.("GOKAI" in Japanese) Many Reiki teachers and practitioners aim to abide by these five principles,[14] one translation of which is:

"The secret method of inviting good fortune.
The marvelous medicine for all sickness
Just for today:

Do not be angry
Do not worry
Be grateful
Work with integrity
Be kind to others.

Every morning and every night, sit in the Gassho position [hands held palm-to-palm] and speak these words out loud in your heart.
For the evolution of body and soul, Usui Reiki Ryoho" - Mikao Usui, the founder.[15]

Usui taught over 2000 students to use Reiki. Sixteen of his students continued their training to reach the Shinpiden level, equivalent to the Western third degree, or master level.[16]

After Usui's death, Chujiro Hayashi a former student of Usui left the Usui Reiki Ryoho Gakkai and formed his own association. Hayashi simplified the Reiki teachings, stressing physical healing and using a more codified and simpler set of Reiki techniques.[17]

Hayashi initiated and trained Hawayo Takata,[18] who travelled widely in the USA, practising Reiki and teaching the first two levels to others.[19]

Takata stressed the importance of charging money for Reiki treatments and teachings. In 1976, Takata began teaching the Shinpiden stage and introduced the term Reiki master for this level.[20] She also fixed a price of $10,000 for the master training.[citation needed]

Takata died in 1979[21] by which time she had trained 22 Reiki masters.[22] Almost all Reiki taught outside Japan can be attributed to her work.[23]

Reiki teachings claim that there is an inexhaustible, universal "life force" spiritual energy,[24][25] that can be used to induce a healing effect.[26] Believers say that anyone can gain access to this energy[27] by means of an attunement process[28] carried out by a Reiki Master.[29] Claims for such energy have no known theoretical or biophysical basis.[4][30][31]

Reiki is described by adherents as a holistic therapy which brings about healing on physical, mental, emotional and spiritual levels.[32] The belief is that the energy will flow through the practitioner's hands whenever the hands are placed on, or held near a potential recipient, who can be clothed.[33] Some teachings stress the importance of the practitioner's intention or presence in this process, while others claim that the energy is drawn by the recipient's injury to activate or enhance the natural healing processes.[34] Going further, the belief is that the energy is "intelligent",[35] making diagnosis unnecessary.

A second level of training, including another initiation, is said to equip the practitioner to perform Reiki treatments from a distance.[36] This method, it is stated, involves the use of special symbols to form a temporary connection between the practitioner and the recipient, regardless of location, and then to send the Reiki energy.[37] Techniques are also taught whereby Reiki can be sent to a specific point in time, either in the past or the future.[38]

In a typical whole-body Reiki treatment,[39] the practitioner asks the recipient to lie down, usually on a massage table, and relax. Loose, comfortable clothing is usually worn during the treatment. The practitioner might take a few moments to enter a calm or meditative state of mind and mentally prepare for the treatment,[40] that is usually carried out without any unnecessary talking.[41]

The treatment proceeds with the practitioner placing his hands on the recipient in various positions. However, practitioners may use a non-touching technique, where the hands are held a few centimetres away from the recipient's body, for some or all of the positions. The hands are usually kept still for 3 to 5 minutes before moving to the next position. Overall, the hand positions usually give a general coverage of the head, the front and back of the torso, the knees and feet. Between 12 and 20 positions are used, with the whole treatment lasting 45 to 90 minutes.[42]

Some practitioners use a fixed set of hand positions. Others use their intuition to guide them as to where treatment is needed,[43] sometimes starting the treatment with a 'scan' of the recipient to find such areas. The intuitive approach might also lead to individual positions being treated for much shorter or longer periods of time.

It is reported that the recipient often feels warmth or tingling in the area being treated, even when a non-touching approach is being used. A state of deep relaxation, combined with a general feeling of well-being, is usually the most noticeable immediate effect of the treatment, although emotional releases can also occur.[44] As the Reiki treatment is said to be stimulating natural healing processes, instantaneous 'cures' of specific health problems are not usually observed. A series of three or more treatments, typically at intervals of 1 to 7 days, is usually recommended if a chronic condition is being addressed.[45] Regular treatments, on an on-going basis, can be used with the aim of maintaining well-being. The interval between such treatments is typically in the range of 1 to 4 weeks, except in the case of self-treatment when a daily practice is common.[46]

Localized Reiki treatments involve the practitioner's hands being held on or near a specific part of the body. Recent injuries are usually treated in this way,[47] with the site of injury being targeted. There is great variation in the duration of such treatments, though 20 minutes might be typical.

The teaching of Reiki outside of Japan is commonly divided into three levels, or degrees.[51]

The first degree Reiki course[52] teaches the basic theories and procedures. Four "attunements" are given to the student by the teacher.[53] Students learn hand placement positions on the recipient's body that are thought to be most conducive to the process in a whole body treatment.[54] Having completed the first degree course, the participant can treat himself and others with Reiki. The course duration is typically two days, although this varies widely.[55]

In the second degree Reiki course,[56] the student learns the use of three symbols which are said to enhance the strength and distance over which the effect can be exerted.[57] Another attunement is given, which is said to further increase the capacity for Reiki to flow through the student, as well as empowering the use of the symbols.[58] Having completed the second level, the student can work without being physically present with the recipient.[59]The three symbols taught in level 2 are as follows: Cho Ku Rei, is a symbol used to increase the power of the healing. Sei He Ki is generally used for emotional healing and finally Hon Sha Ze Sho Nen is used for distance healing. These symbols have other uses as well, but these are the primary uses taught today.

Through the third degree, or "master training",[60] the student becomes a Reiki Master. (In Reiki terminology, the word 'master' does not imply spiritual enlightenment.) One or more attunements are carried out and the student learns a further master-level symbol.[61] Having completed the master training, the new Reiki Master can attune other people to Reiki and teach the three degrees of Reiki. The duration of the master training can be anything from a day to a year or more, depending on the school and philosophy of the Reiki Master giving the training.

Find us on the map

Send Us An Email Today!